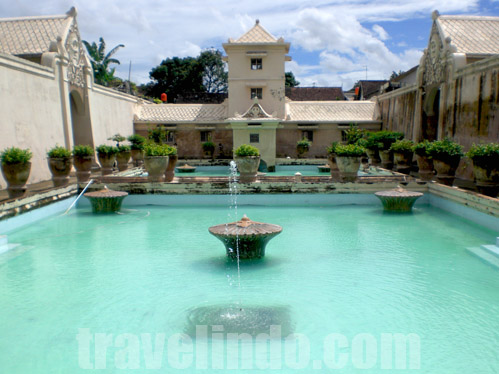 Water Castle Taman Sari is a water castle that is located only about 1 kilometer in the west side of the Sultan Palace, Kraton Yogyakarta. It was built in the era of Sultan Hamengku Buwana I that was finally finished by Sultan Hamengku Buwana II. He built this place by creating a new style that was a combination and a mixture of Javanese and Portuguese architecture.

Some people say that Taman Sari has been built after the Treaty of Giyanti (1755). During the time, Sultan Hamengku Buwana has been dealing with battles and conflicts. Therefore, Taman Sari was intended to be a place where Sultans can find a peaceful heart and mind as a refreshing place. It was also created as a fortress to anticipate the emergency situation, as a place for worship that is also equipped with a little mosque at the Sumur Gumuling.

1. The Sacred Room
There is the sacred place in the complex showing a separated building, which once functioned as a hermitage place for the Sultan and his family.

2. The Bathing Pool
This part was formerly a pleasure place for the royal family. Consists of two bathing pool that are separated with a 2-storey building. From this building the Sultan watched all the women swimming in the outer pool. Then he might ask some of them to accompany him into the inner pool. The water sprouts from a forming animal statue into the pool. The pool is also adorned with some big flowerpots.

This part compounds of some buildings such as Kenanga or Cemeti Island (forming Island), Sumur Gemuling and underground tunnels.

Taman Sari was once a beautiful and sophisticated water-park that long time years ago was also called as 'Segaran' which is in the Javanese word means artificial sea.

Long time ago, every time Sultan visited the park, he went there by rowing a private canoe through the suspension bridge called 'Kreteg Gantung' which lay in front of the palace gate, southward or northward Kemandungan. The remainder of the building that was once connected by the suspension bridge can still be seen. Besides water transportation, there was also an underground passage or alley from the Kraton of Yogyakarta leading to one of the park buildings which is called Pasarean Ledok Sari.

Formerly, the water castle was not only a beautiful park but also the means of avoiding danger. Whenever the enemies attacked the palace, Sultan and his family would flee away through the underground passage. When all were in a safe place, the Watergate would be opened and the water would overflow the passages and the enemy would be sunk.

One part of the place was called Pulau Kenanga because in the front of the front yard of the building grew Kenanga trees (Canangium Odoratum). The flowers spread out the sweet fragrance through all parts of the park. The lofty buildings such as the pond were built especially for the Sultan and his family as a bath-place. The underground passage leading to the west area, and the bulwark which encircled the area of the palace, as well as the one which leads south ward to a small village called Krapyak, have been restored.

Versions on the Establishment of Taman Sari:
First Version
This version states that in Mancingan (a place in beach of south Yogyakarta), there was a unknown person whom the people consider him as a spooky. He did not speak Javanese. As the people took him to Sultan Hamengku Buwana II, the king took him as a servant in the palace. Afterward, the strange man began to speak Javanese. He said that he was a Portuguese. By Sultan, He then was declared as an architect.

Sultan Hamengku Buwana II ordered him to establish a fortress. For his work, the Portuguese was promoted as a demang called Demang Portegis or Demang Tegis. It was Demang Tegis who was considered as the architect of the Taman Sari. The concept of the building came from Portugal. It can be seen from its art and design.

Second Version
The second version states that once upon a time, the regent of Madiun named Rangga Prawirasentika who has served Sultan Hamengku Buwana I for years asked him to be freed from the taxes obligation. Rangga Prawirasentika will agree with certain conditions if only Sultan Hemengku Buwana I asked him to complete the ornament of the palace. Sultan then agreed with the condition.

By Sultan Hamengku Buwana I, in 1684 Raden Rangga Prawirasentika was ordered to create brick stones and other materials to make a garden as a place for recreation as the result several wars. The order was marked by 'Sengkalan Memet' that stated atur Naga Rasa Tunggal' (1684).

The end of the project was marked with Sengkalan Memet 'Lajering Kembang Sinesep Peksi' (1691). It described birds that absorbed the honey of the flowers.

This version also explained that the price to create the garden was even bigger than the amount of money to be submitted for two years. Raden Rangga Prawirasentika then asked Sultan to cancel the project. Sultan agreed and ordered K.P.H. Natakusuma to finish the garden with his own money.