KOTAGEDE, ENCHANTMENT OF AN OLD CITY 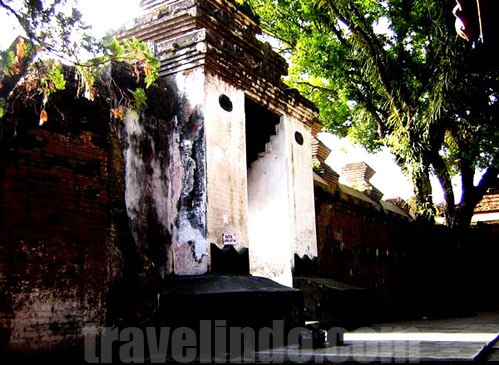 Pemanahan over who was in opposition to the King of Pajang was the beginning of the foundation of the Islamic Mataram Kingdom. Thanks to Ki Pemanahan who helped Pajang, the King of Pajai rewarded him a forest named Mentaok where he built the Islamic Mataram Kingdom in 1575 with his people called mentawisan.
An Old City as Center of Silver Handicrafts.

Located around 10 kilometers at the Southeastern part of Yogyakarta city center, the area is now well known as Kotagede as the center of silver handicrafts in Yogyakarta. Keeping around 170 old buildings built in 1700 to 1930, Kotagede is not only named Silver City but the Old Capital City as Charris Zubair Ahmad, a Kotagede cultural observer, said.
Kotagede Entering from the north through Gedong Yellow, a small street framed with classical buildings along both sides look like an exotic opening for tourists after going through the gate.

Since entering Kotagede area, tourists begin to enjoy various kinds Silver handicrafts sold at various prices at the front part of local peoples house Functioning as the gallery at the same time. Most of the houses are in traditional Javanese architecture called Joglo.

Silver handicraft is a culture descended by the ancestor to the next generations. Initially, handicrafts in Kotagede were made of gold, silver and copper. By the Coarse of time, however, silver is most preferred. For the reason, craftsmen make more silver handicrafts until today. This handicraft is exported to foreign countries, mainly to Europe. Order is usually increasing by the year end.

Please drop by at the gallery to see various kinds of handicrafts, ranging from jewelry, silver ornaments and utensils that are made with artistic touch of Kotagede silversmiths. Warm smile and greeting are pleasant reception to begin the exploration through Kotagede.
The Tomb of Old Mataram Kingdom Founder

To the south village, there is a traditional market of Pasar Gede named. Even though the architecture of the building is simple, the traditional market Panembahan Senopati built in time has been one of economy activities of mentawisan community. For this reason, Kotagede used to be known as Pasar Gede or Sargede.

Around 50 meters south of Pasar Gede on the Big Mosque Street, there is a gate with long fort Protecting one of Mataraman triumph sites in the past that is still well taken cared of. Some banyan trees with long hanging roots telling its old age looks like the Guardian of the sacred place. Passing through the second gate there is a two-meter high wall with passages on both sides that cuts off the view of the third gate as the entrance to Masjid Agung (The Great Mosque) complex.

At the center of the complex, there is a Great Mosque surrounded by the houses of the court servants. The mosque was built by Sultan Agung with his local people  most of them were Hindus and Buddhists  so that much of the architecture adopted typical of Hindu and Buddhist architecture. One of it is the mosque gate that is carved like monasteries. Most of the wooden carvings at each corner of the mosque are of Hindu and Buddhist styles. This is unique to the mosque. There is also a pulpit with unique carving in the mosque as tribute from Palembang Regent to Sultan Agung.
To the south of the mosque there is tomb complex of the predecessors of the Mataram Kingdom and their families that used to be dwelling place of Ki Pemanahan. 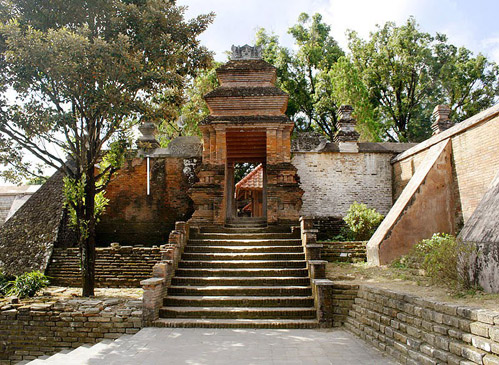 Passing through the second gate there is a complex Functioning as border as well as connecting line to the tomb and Sendang Saliran (place for bathing). There are office, warehose, clamps ward lor (framing north hall) and ward clamps south (south framing hall) in this complex.

Meanwhile, to the south of the tomb there is a place for bathing that is divided into Sendang Kakung for men and for women Sendang Princess. Bathing in this place can cure some illness and gift of success and prosperity.
Kalang House 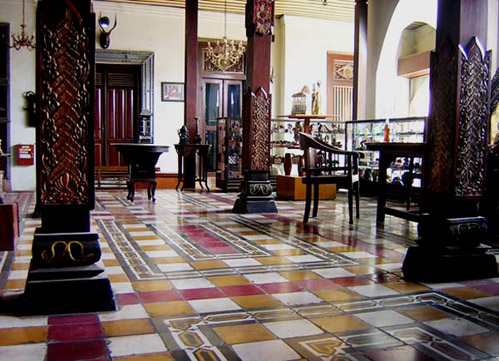 After religious visit to the tomb, visitors may visit one of the old houses built by the late Pawiro Suwarno, who was a rich entrepreneur in Kotagede, in the 1920s. This house is well known as House Kalang (Kalang House). Kalang are people invited by the King to become carvers of court jewelries.

The Uniqueness of this Kalang House is Unification of Javanese and European elements, namely joglo as the main building that is located at the back part and the European model for the front part. This European-building tends to be of baroque shape with Corinthian and Doric styles. The joglo building, especially the hall is not open as the joglo of Javanese house anymore; it is modified as being closed. Green and yellow colors of the reliefs are not Javanese colors anymore. The presence of glasses as the colorful mosaics connecting the Pillars shows that this has received other joglo touch.

This house with mixture of Javanese and European styles now belongs to Ansor family and it is located 300 meters north of Pasar Gede. Architecture while enjoying the beauty of the past time, tourists can buy silver handicrafts carved by skillful hands and enjoy delicious meals in Ansor familys house as the biggest gallery in Silver Kotagede and a restaurant without changing the original shape of the house.
Special Cuisines and Menus

Talking about delicious meals, it is not complete yet before trying a special menu of Kotagede, namely Sate Karang. This name is given after the name of the village that is Reef Village, where Prapto sells this food from evening till night. This is sweet, grilled beef with two Uniqueness. First Uniqueness is the choice of three sauces, namely peanut sauce, ketchup sauce and kocor sauce. Kocor sauce is chili sauce like the sweet sauce for rujak (mixed fruits). The second Uniqueness kencur is the rice beverage (made of rice and greater galingale).

Before leaving Kotagede, do not forget to buy kipo, special food of Kotagede, made from rice flour and filled with sweet coconut Grates, shaped as big as human fingers and served on banana leaf.
Source: http://indonesiacountry.com