Only few people really know about Borobudur temple. Most of them are only familiar with its general description. What about the others? There are many things about Borobudur you have to know. Its mystery, at the present is still attempting to be discovered. Its glory, until now is still being adored by the people around the world. Its phenomenon, in recent times is still worthy to be observed. 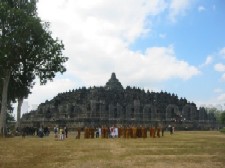 Borobudur is the ninth century of Mahayana Buddhist monument in Magelang, Central Java, Indonesia. Approximately 40 kilometers northwest of Yogyakarta this great structure located between two twin volcanoes, Sindoro-Sumbing at the north-west and Merbabu-Merapi at the northeast; and two rivers, Progo and the Elo. In the western and the southern sides, a remarkable display long series of rocky hill of Menoreh range. Since 1991, UNESCO listed Borobudur as a World Heritage Site.
Unlike to the other temples design, Borobudur is not built on flat surface, but the construction is set on a natural hill with no inner space. Approximately 55,000 m³ of stones were taken from neighboring rivers Elo and Progo to build the monument. The stone cut then transported up hill and set without mortar. Reliefs were created in-situ after the building had been completed. 100 spouts with unique carved gargoyles decoration show the monument's good drainage system to anticipate flood. Viewed from above, the construction design bears a resemblance to a giant tantric Buddhist Mandala. In general, Borobudur is illustrating a single large stupa than a temple. Borobudur has nine platforms built on a bedrock hill, 265 m above sea level and 15 m above the floor of the dried-out paleolake. The lower six are square and the upper three are circular with 2,672 relief panels and 504 Buddha statues decoration. The upper platform features seventy-two small stupas surrounding one large central stupa. Each stupa is bell-shaped and pierced by numerous decorative openings. Statues of the Buddha sit inside the pierced enclosures. The main vertical structure is divided into three groups: base (or foot), body, and top. The three divisions symbolize three stages of mental preparation towards the ultimate goal according to the Buddhist cosmology:
Access to the upper part is through stairways at the centre of each side with a number of gates, watched by 32 lion statues. The main entrance is at the eastern side, the location of the first narrative reliefs. On the slopes of the hill, there are also stairways linking the monument to the low-lying plain. Borobudur contains approximately 2,670 individual bas reliefs (1,460 narrative and 1,212 decorative panels), which cover the façades and balustrades. The total relief surface is 2,500 square meters (26,909.8 sq ft) and they are distributed at the base (Kamadhatu) and the five square platforms (Rupadhatu). Following the major 1973 renovation funded by UNESCO, Borobudur is once again used as a place of worship and pilgrimage. Once a year, during the full moon in May or June, Buddhists in Indonesia observe Vesak (Indonesian: Waisak) day commemorating the birth, death, and the time when Siddhartha Gautama attained the highest wisdom to become the Buddha Shakyamuni. Vesak is an official national holiday in Indonesia. The journey for pilgrims begins at the base of the monument and follows a path with 1,460 narrative relief panels on the wall and the balustrades. The system of staircases and corridors guide the Pilgrims to the main stupa on top platform.