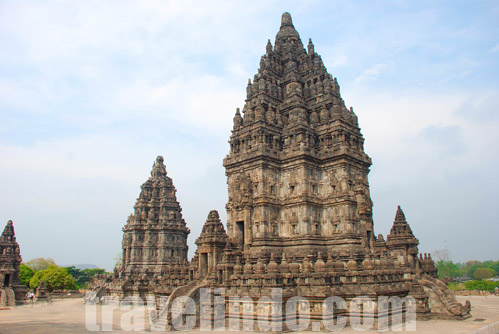 Prambanan is the biggest Hindu temple in South East Asia located on Central Java and Yogyakarta. It has a main temple looks like Gunungan (mount at leather puppet shadow play). Prambanan temple has three main temples in the primary yard; those are Vishnu, Brahma, and Shiva temples. Those three temples are the symbols of Trimurti in Hindu belief that all of them face to the east. Each main temple has accompanying temple facing to the west, namely bull Nandini for Shiva, Angsa for Brahma, and Garuda for Vishnu. Besides, there are 2 flank temples, 4 kelir temples and 4 corner temples. In the second area, there are 224 temples. 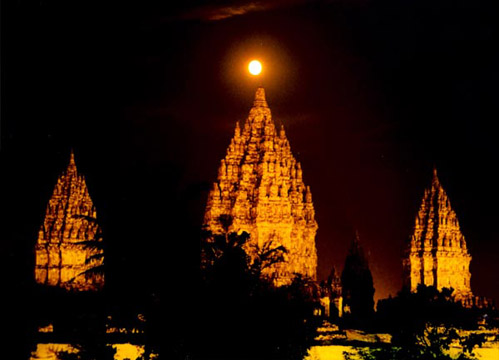 Shiva temple, the biggest and the tallest temple located in the middle. The temple is equipped with four rooms. Its dimension is 34 m x 34 m with 47 meters height. The main gate faces to the east and has four rooms on each side. One main room contains Shiva statue (Shiva Mahadewa), while the other three rooms contain the statues of Durga (Shiva's wife), Agastya (Shiva's teacher), and Ganesha (Shiva's son). Durga statue is said to be the statue of Roro Jonggrang in the above legend.
Reliefs depicting the heavenly creatures were carved around the foot of the Shiva temple symbolizing the cosmic system. Entering the temple from the south and walking around the sub base of the temple with the main shrine on your right (Pradaksina), we will see the whole relief of the Story of Ramayana. The story ends at the relief carved on the balustrade of Brahma temple. The story of Kresnadwipayana which tells the childhood of Prabu Kresna can be seen on the balustrade of Vishnu temple.
Brahma temple, to the south of Shiva temple, is smaller than Shiva temple with 20 m x 20 m and 33 meters height. It only has one stair entrance on the east side where the Brahma statue is located. On this area, there is relief Ramayana that continues the story on the Shiva temple. The end of the story is Kusa and Lawa to be promoted as Pangeran Pati.
Vishnu temple, to the north of Shiva temple, has the same size with Brahma temple which is 20 m x 20 m and 33 meters height. It only has one stair entrance on the east side where the Vishnu statue is located. On this temple, the relief tells about the Kresnayana that describes about the life and the glory of the Gods of Vishnu. In the relief, Kresna is described as the reincarnation of Vishnu. In Vishnu temple, there is one temple named Garuda temple that is located close to Vishnu temple. This temple keeps a story of half-bird human being named Garuda. Garuda is a mystical bird in Hindu mythology. The figure is golden body, white face, red wings, with the beak and wings similar to eagles. It is assumed that the figure is Hindu adaptation of Bennu (means 'rises' or 'shines') that is associated with the God of the Sun or Re in Old Egypt mythology or Phoenix in Old Greek mythology. Garuda succeeded in saving his mother from the curse of Aruna (Garuda's handicapped brother) by stealing Tirta Amerta (the sacred water of the gods).
The temple complex is surrounded by more than 250 individual temples of different sizes, called Pewara. Pewara are believed to offered to the king as a sign of submission. The Pewara are arranged in four rows around the central temples, and people allowed to enter them based on their rank. The central row was accessible to the priests only, while the other three were reserved for the nobles, the knights and the simple people respectively.
This Hindu temple was built by either Rakai Pikatan, king of the second Mataram dynasty, or Balitung Maha Sambu, during the Sanjaya Dynasty in the 9th century (around 850). According to the prasasti Ciwagrha in 856 by Rakai Pikatan, Prambanan temple is constructed with one concept as a center of devotion for Shiva as the main statue.
Prambanan temple was once again recognized by a Dutchman named C.A. Lons who came to Java in 1733 and found the ruins of temple in grassland. The first effort to preserve the temple was made by Ijzerman in 1885 by cleaning up the rooms from the stone ruins. In 1902, led by Van Erp, the restoration was begun of Shiva temple, Vishnu temple and Brahma temple. As the world attention began to grow on the temple, in 1933 Vishnu temple and Brahma temple were successfully restored in trial. On December 23 1953, Shiva temple was also restored. Brahma temple was restored officially in 1978 and publicly finished in 1987. Vishnu temple was restored officially in 1982 and publicly finished in 1991. The other restoration was made for the three perwara temples which were located on Shiva temple, Vishnu temple and Brahma temple, the fourth kelir temples and the fourth corner temples.
Nowadays, Prambanan temple is still identical with the story of Ramayana, therefore from May-October at full moon, the story of Ramayana (sendratari) is usually presented in the evening at 19.30 - 21.30 WIB. Being a traditional dance, it is performed on an open-air stage at the west of the temple.