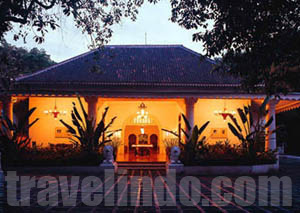 Hotel Tugu Blitar, unprecedentedly the best hotel and restaurant in town and located at the heart of the Town of Blitar, is housed in a colonial building that was built in the 1850s, and was previously owned by a distinguished family of Blitar. After the second World War, the hotel was called Hotel Centrum; many years after the name was changed to Hotel Sri Lestari. Hotel Sri Lestari still exists until now as a neighboring hotel to Hotel Tugu Blitar - both hotels are now one entity called Tugu - Sri Lestari.

The building was carefully renovated to preserve its artistic, charismatic, and historical characters. Hotel Tugu Blitar also features the Sang Fajar Suite as a tribute paid to the late first president and proclamator of independence of Indonesia, Soekarno. The hotel's restaurant serves the best dining in town, ranging from traditional Indonesian, Chinese and European Cuisines, and was given awards by the local government for its uncompromised hygiene qualities. To discover the real, unspoiled East Java means a visit to the town of Blitar, Blitar's beautiful temples and beaches, and the first president's grave. Blitar kept its indigenous Javanese character: traditional markets, an old town-square 'Alun-Alun', public transports dominated by becaks.